From Beans to
Hot Chocolate

When you think about hot chocolate, you likely imagine an indulgent, silky beverage that hits all the right notes on a cold Winter’s night. What you probably don’t think about is how a little bitter bean can turn into something so luxurious and indulgent – let alone where these beans come from.

Hot chocolate of the past is a far cry from the smooth, velvety beverage that we love and enjoy today. In the past – before the extraction of cocoa butter from cocoa liquor became standard practice – the cocoa butter in the ground beans resulted in a thick, gritty beverage with a layer of oily fat on its surface. This made it difficult to combine with water to create a silky emulsified beverage.

Follow us on our journey of exploring farming, fermenting, drying, roasting, winnowing to creating the perfect brew.

Cacao trees require a high humidity climate with plenty of rain to be able to grow – which is why you will find that the “cocoa belt” is exclusively within 10 degrees of the equator.

The fruit, which is called the pod, grows on the trunk of the tree, and this is where you find your cocoa beans. Enclosed by sweet pulp, there are 20-60 cocoa beans in each pod. Each tree produces only 50-60 pods a year. To put this into perspective – it takes 400 beans to make around 500g of chocolate!

Did you know? Ghana & the Ivory coast are two of the largest producers of cocoa, and account for more than 50% of the world’s cocoa. In 2016 alone, the Ivory Coast yielded an incredible 1.6 million metric tonnes of cocoa beans! 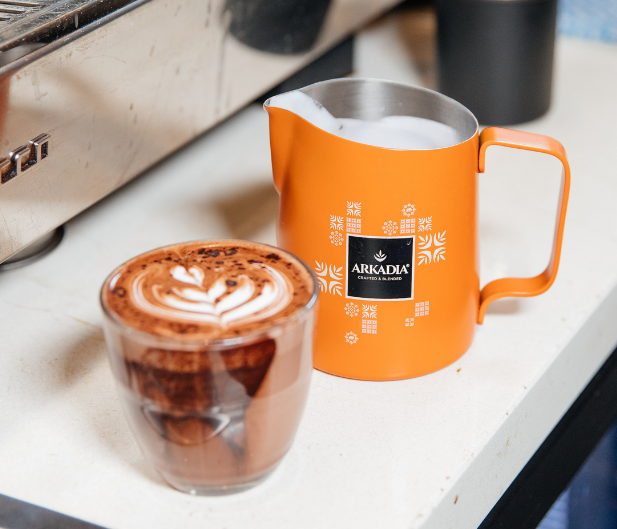 How is hot chocolate powder made?

The process of harvesting only takes place twice a year. The first is from November to January, and the second in May to July. Once the fruit is handpicked from the trees, the seeds & pulp are separated from the pod.

This 5-day process involves laying beans and pulp in fermentation boxes and stirring constantly as the fermenting beans generate heat. By the end of this fermentation process, the beans become brown, the bitterness subsides and the flavour deepens.

After fermentation, the beans still contain too much liquid to be used in chocolate. They are laid out in the sun to dry for 14 days. After this, these are vigorously inspected using strict QA procedures and separated.

Roasting takes place at 98-100c ° for 10-15 minutes. Not only does this help to sterilise the beans – it also helps to enhance the flavour.

This is the process of taking the shell off the beans. This is when you are left with the ‘nib’- which is the most desired part of the bean.

Grinding is the process in which cacao nibs are ground into cocoa liquor - also known as unsweetened chocolate or cocoa mass. The process on grinding the nibs, which may take place between two stones or by machine, generates heat which turns the nibs into a liquid as the naturally occurring fat within the cocoa nibs melt.

This is where the process of hot chocolate and chocolate making start to differ. Where chocolate continues to undergo a process of conching and tempering – hot chocolate powder requires the extraction of cocoa butter from the cocoa liquor, pressing, sifting and may also include the addition of a stabilising alkali substance to the remaining cocoa mass after extraction.

To make Dutch cocoa powder, cocoa liquor is pumped into hydraulic presses in order to squeeze out the cocoa butter. Through a process called ‘’Dutching” in recognition of modern hot chocolate’s origins, an alkali substance like baking soda is added to the remaining material, where it is then called “press cake”.

The treated press cake is then cooled, pulverised and sifted to form cocoa powder. This is then packaged for sale in grocery stores as hot chocolate mix or sold in bulk as flavouring in dairies, bakeries and candy manufacturers.

The liquid cocoa butter that is pressed out of the cocoa liquor is usually then sold to manufacturers of pharmaceutical and cosmetics. 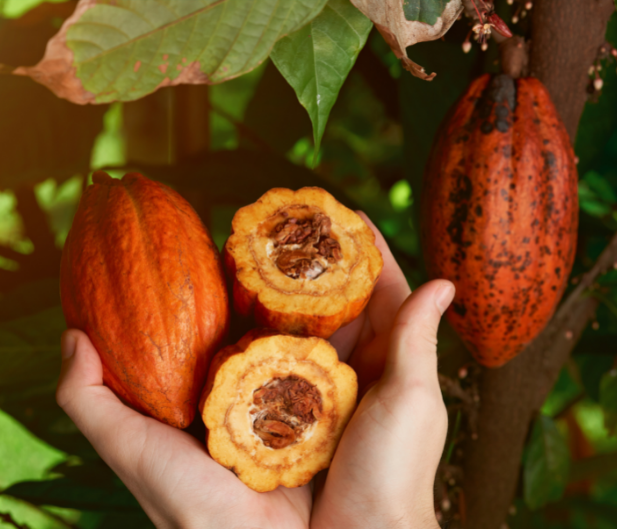 As you can see, the process of turning beans to the perfect hot chocolate is so much more than heading to your local supermarket’s beverage aisle! From harvesting to fermenting and grinding to pulverising – this complex process is required in order to produce one delicious mug of hot chocolate.

From Beans to Hot Chocolate

Visit us at Host Milan

From Beans to Hot Chocolate

Visit us at Host Milan